Five stories that have captured my interest in the last seven days. The photo was taken in the Lama Temple, Beijing, which has ceremonial/teaching seats for both the Dalai and Panchem Lamas in it. I think it’s been a while since they were filled.

o   A protesting Tibetan monk in China took the extraordinary step of setting himself on fire. He was then shot by police. The official story from Beijing varies, and the truth is elusive. Beijing has banned foreigners from the area at present, because it’s Tibetan New Year and also the 50th Anniversary of the Dalai Lama’s escape into exile. Any Beijing defenders should ask themselves: ‘if the government are doing the right thing, and the Tibetans really are trouble makers, wouldn’t the government want international media there to report what’s actually happening?’ 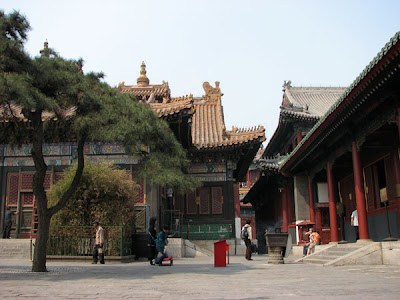 o   Australian celebrity agent Max Markson is thinking of bringing George Bush to Australia to do a bit of public speaking. He thinks Australians will be willing to pay $1000 to hear the great man speak. I suspect the price is so high in order to keep people like me away. I reckon I’d pay a couple of hundred dollars for the chance to heckle Bush.

o   Harry Nicolaides was released from a Thai jail after writing a paragraph in his book which slandered the Thai Royal Family. A former colleague thinks it’s a publicity stunt. The book sold seven copies: personally, I don’t think gives him the right to be called a ‘writer’. I know more people than that who would, to humour me, pay money for a stick figure I drew. Would that make me an artist?

o   The United States showed they’re still on another planet by threatening to boycott a United Nations Racism Conference. They say a text related to the event unfairly singles Israel out for criticism. Some people apparently take issue with Israel’s belief their nation has a divine right to do whatever the hell they want. Rather than engage with the issue and debate it, the U.S. solution is to not show up. Very mature. Kyoto anyone?