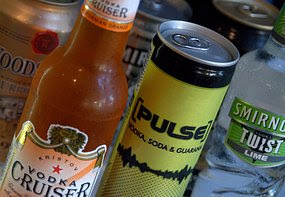 In the last couple of days there have been developments in a story I’ve been following – the tax on alcopops. You might recall I was skeptical whether the increased tax on the drinks would reduce binge drinking amongst young people. I’ve been proved right a couple of times, the most recently by a report which indicates that youth hospitalizations due to alcohol abuse have increased.

Family First Senator Stephen Fielding is still causing a nuisance of himself, threatening to derail the legislation unless the government introduces some actual measures to combat teenage drinking. Good on him. He’ll likely get what he wants too. The government needs the support of all seven cross-bench senators to pass the legislation and avoid having to return millions of dollars in already collected taxes.

And he’s right. Price hikes aren’t going to stop kids drinking, they’ll just change what they drink. I heard an interesting discussion on Radio National this morning where they outlined the dangers of teenagers moving from pre-mixed drinks to drinking their own. The experience that kids have of mixing things is with cordial – roughly a 25/75 mix. That’s a pretty strong vodka and Coke

I’m personally a fan of the tax. I’d just like the government call a spade a spade and admit that they’re just engaging in a bit of good old revenue raising. Then they could maybe actually do something effective about the issue.