Very Superstitious, Writing’s on the Wall 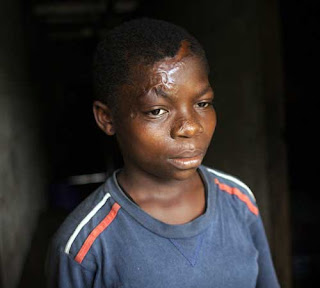 A man claiming to have killed 110 child ‘witches’ has been arrested by police in south-east Nigeria. After his arrest he changed his statement to say that he didn’t actually kill the children, just the ‘witch’ inside of them. Whatever the case may be, the story highlights a horrible superstition plaguing parts of Africa.

The superstition is also a relatively new one, making this even more scary. Unsurprisingly, it’s being fed and fueled by Christians in the region, particularly the Liberty Gospel Church, an evangelical group. They produce and distribute a video which says that “an infant under the age of two may be possessed if they scream in the night, experience ill health or get a fever.”

It is not uncommon for such children to be abandoned, hideously injured, murdered or indentured into prostitution. This picture is of a girl who had acid thrown in her face after being accused of being a witch. The organisation CRARN (Children’s Rights and Rehabilitation Network) is presently looking after 170 children who have been “abandoned or abused after being accused of witch craft.”

To me this story and issue highlights two things. The first is the danger of fundamentalist religion, particularly Christianity and even more particularly, Evangelicals. Sydney’s Hillsong, owner operators of many franchises of the disgusting coffee chain Gloria Jeans, are another evangelical Christian group, and some of the things I’ve heard about them would make your stomach churn. Don’t be seduced by the happy clappy.

The second thing this brings to mind is political correctness. In Australia, especially during the Howard years, we used to hear a lot about “respecting cultural differences.” That’s all well and good, but how far does that go? Is the abuse of children in Nigeria a cultural difference that should be respected? I don’t think so. When a practice violates someone’s individual human rights, be it children, women, minority groups or anyone else, my general view is cultural differences be damned.