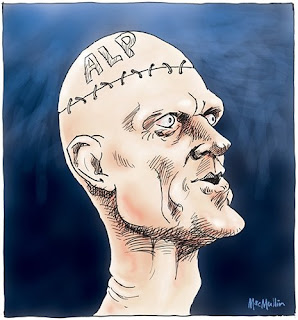 Last Monday I posted about some political dodginess involving Amanda Vanstone and various Italians. After posting I was cruising Facebook and noticed that it was Kevin Rudd’s birthday the day before. I was still feeling a little fired up about the issue, so I decided that I’d send a copy of the post, and a bit of a birthday wish, to the Prime Minister, asking whether he was going to do something about it.

I also sent it to Julie Owens, my local member of parliament, because I thought that it’s part of her job to listen to the gripes of her constituents. While I was at it, I sent a copy to Peter Garrett, because I like Midnight Oil. I used to like the big bald fella’s politics too, but I’ve been a little disappointed in him since he joined Labor. I wanted to give him a chance to get back in my good books. Garrett joining Labor, to me, is akin to when Cheryl Kernot defected from the Democrats. I wonder if Peter did any “special favours” for Gareth Gareth Evans?

I haven’t heard back from either Messers Garrett or Rudd yet. I’m giving them the benefit of the doubt for the moment and assuming they’ve been busy doing other less important things. But Julie Owens wrote back to me the following day, which was very nice of her. She brought to my attention that the current Minister for Immigration, Chris Evans, is attempting to reduce the power of his office so that abuses such as the one I’ve been railing about do not happen again.

I’d still like Amanda Vanstone’s head on a figurative platter though.

(The cartoon of Garrett MP is by Peter MacMullin and first appeared in The Advertiser in 2007.)