By Mark RiboldiSeptember 20, 2008December 14th, 2013My Travels, Photography
No Comments

Now the beginning of Day Nine of traveling across Australia was really the tenth day of the trip, but because we didn’t do any driving the day before, I’m not counting it as a ‘day’ in the grand scheme of things. I would have, but I actually didn’t realise until I got to last week’s post that the whole thing took eleven days. Oh well. I don’t know if Sydney to Perth in 11 Days has the same ring to it.

Whatever the case may be, on the morning of Day Nine we left Albany and drove towards Denmark. The landscape began to change very quickly. Since Esperance we’d been on a typical Australian coastline – gorgeous beaches plus scrub, but now we began to enter the old growth forests. 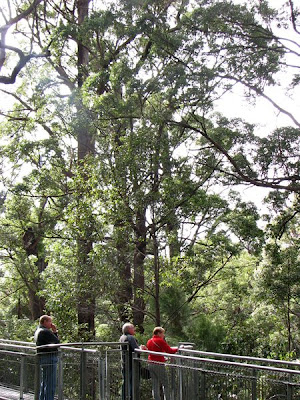 Not far out of Denmark, the Walpole-Normalup National Park begins. At the east end of the park, where we were entering from, is the Valley of the Giants drive trail. We drove through a forest of huge karri and red tingle trees, some of them up to sixteen metres in circumference and over seven hundred years old. 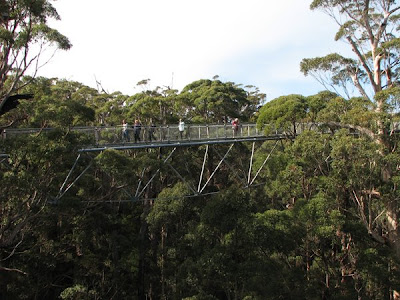 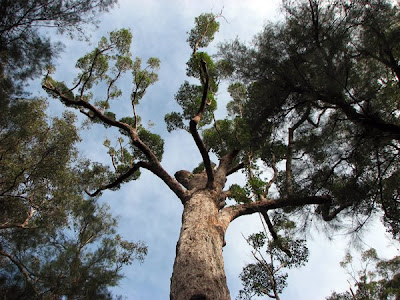 There’s a visitor’s centre where they have created a skywalk, and we walked up amongst the tree tops, up to forty metres above the forest floor. Then there’s another walk around on the ground, so we got to appreciate these amazing trees from both above and below. It was roughly three times cheaper than Whale World the day before, and easily one hundred times better. 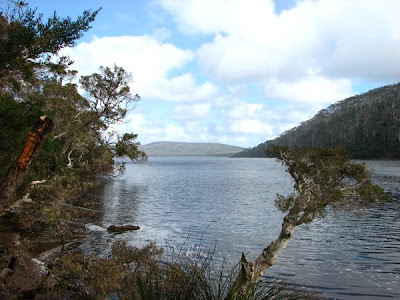 After that we continued driving through the National Park to Walpole, where I had a massive BLT for lunch and we checked out Normalup Inlet. The places around here are imaginatively named, including Conspicuous Cliffs and Hush Hush Beach, but we couldn’t visit a lot of places because they were on unsealed roads. Chris’s car had been very nice to us up to that point, and we didn’t want to push the issue. 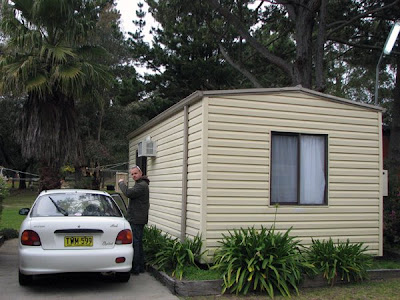 The rest of the drive for this day continued through timber country, and it was probably my favourite of the whole trip. Trees rock. We’d decided to stay in Manjimup that night, which turned out to be not such a great idea. The caravan park was average, compared to the ones in Albany and Esperance at least, and the town was deader than Elvis. We came to rue are choice the following morning, when we drove up towards Perth and passed through the lovely looking Bridgetown. It looked home to many a hippy, and we would have been guaranteed better fare than pizza or meat pies for our supper. 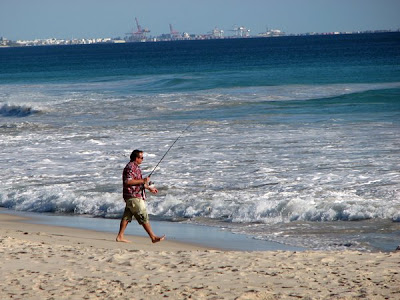 It was straight to the west coast of Australia this day, and we got a taste of real food again for lunch. Chris had a penne arabiata and I had a nice and chunky lasagne from a chic little Italian joint in Freemantle, which is a bit like Newtown or Darlinghurst in Sydney, but on the water. After lunch we hugged the coastline as we continued up through Perth to Chris’s new digs. I met his new boss, Monique, and her son Mattieu, one very cool kid. While Chris and Monique talked science stuff, Mattieu showed me his room and read me his pop-up dinosaur book. 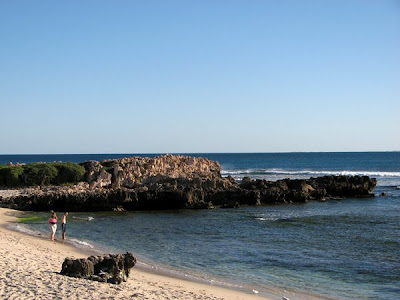 And then, having been on the road for ten to eleven days (depending on which way you count it) all the way from Sydney to Perth, having finally arrived at out destination, after days upon days of spectacular sights, great company and some tasty yet fatty food which I probably still haven’t worked off yet after three weeks of intense exercise at the gym, after all this effort to drive 5,000km from one side of, I jumped on a plane and took the red-eye straight back to Sydney.