Long Live the King of Thailand 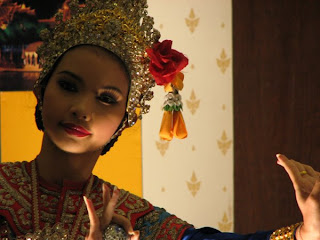 There’s an Australian blogger/writer, Harry Nicolaides, being held in a Thai prison for slandering the Thai Royal Family. The crime was purportedly committed in a book that he wrote about Thailand, which had a print run of fifty and sold only seven copies. One of those readers evidently wasn’t too impressed with a brief and unflattering reference to one of Thailand’s Crown Princes. The charge has a potential jail sentence of 3-15 years.

Anyone can invoke the law ‘lese majeste’ on anyone else, and all claims must be investigated. The Royal Family never invokes the law themselves. Sounds a bit McCarthyist to me. Nicolaides isn’t likely to be in jail for long, the King has a history of pardoning foreigners very quickly; for example, a drunk Swiss man who sprayed graffiti on the king’s portrait; a French passenger on Thai Airways who refused to turn off his reading light while sitting next to a princess.

Recently, two young Thais who failed to stand up for the Royal Anthem in the cinema were charged under the law. This is a short, two minute clip that is played at the beginning of every film that is shown in Thai cinemas. This is the version that I saw when I was there. The quality is pretty bad, but you’ll get the idea.

The first time I saw it (I ended up seeing it three or four times – cinemas in Bangkok were super-cheap, ultra-comfortable and were showing lots of Hollywood blockbusters) I was gobsmacked. It’s blatant propaganda if you ask me. Media students should have a field day pulling this apart. I particularly like the giant swimming through the turbulent oceans. A nice touch.