The Khmer Rouge in Phnom Penh 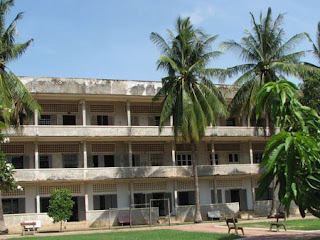 When I was originally planning on visiting Cambodia, I was only going to go to Angkor Wat and hang out in the temples whistling the Indiana Jones theme song. But due to the exorbitant prices of flights between Bangkok and Siem Reap, I decided to spend a couple of days in the Cambodian capital, Phnom Penh.

I really didn’t like it there. It was my first experience of a third world country, and I was in no way prepared for the level of poverty that I encountered. It also seemed like almost every single person that I met was trying to squeeze every single dollar out of me that they could. It wasn’t until I’d left the capital and made my way to Battambang that I discovered how wonderful Cambodia and its people really are.

But I did do a couple of things of note in Phnom Penh. One is that I rode on a motorcycle for the first time (the twenty metres I’d traveled the time I was trying to learn to ride one but instead had the bike fall on me after I screwed up a corner don’t really count). The other is that I visited the Tuol Sleng Genocide Museum and the Killing Fields of Choeung Ek.

In a historical nutshell: the Khmer Rouge (Red Khmers) took control of Cambodia in 1975, and immediately launched Year Zero, engaging on a mass social reorganisation beginning with the expulsion of all of the people from the cities to work the fields. Institutions such as shops, banks, hospitals, schools, religion, and the family were all banned. Estimates of the death toll from Khmer Rouge policies range between 1 and 3 million people over five years, or between a quarter and a third of the country’s population. I didn’t see many old people in Cambodia. 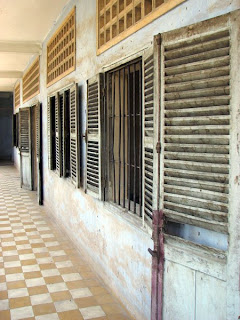 I went to Tuol Sleng first, and it’s here that I met my first land-mine victim, begging for US Dollars outside the front gates. But this guy wasn’t like the other limbless victims I later met in Cambodia; he had all his arms and legs, but the land mine had taken his face, leaving no recognisable features. I’d never felt horror like I did that instant I turned and saw his face, six inches from mine.

There was something eerie about standing in the main courtyard of Tuol Sleng. This isn’t a museum like any other you’ve seen. Originally a high school, during the time of the Khmer Rouge it was the security prison known as S-21, a place of torture and extermination. Of the estimated 17,000 people who were imprisoned here, twelve survived.

I walked around all of the school buildings, up and down crumbling stairs and in and out of rooms, walking across the echoes of the children who had learned there and those of all ages who had died. The museum was opened in 1980, one year after the fall of the Khmer Rouge, and it’s still a work in progress. At the top of one flight of darkened dusty stairs I found bloodstains waiting to be bleached away. 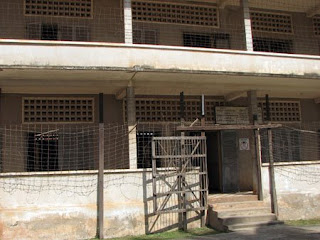 After over two hours in Tuol Sleng my tuk-tuk driver took me out to the famous Killing Fields of Choeung Ek, where close to 17,000 Khmers were executed and buried in mass graves. It was a hollow experience, partly because my driver spent most of the 17km out there complaining about how long I’d spent in Tuol Sleng – most of his customers were in and out in thirty minutes – and also trying to get me to go try out a firing range in the afternoon.

I also made the mistake of teaming up with a grungy young American with compulsory goatee and engaging a local guide. It was good because the guide, a university student, was the first nice Khmer I’d met, but I generally prefer absorbing places at my own pace and in my own space. I like feeling where I am, soaking in the stillness and emotion of history.

So in the end I was disappointed with that experience, if it’s not too callous to say that about visiting a site where so many people died horrible deaths. And though I was relieved to get out of Phnom Penh the following day, I am glad that I went there, because it’s now the First Act in what was a quite memorable journey.

If you want to know more, I’ve embedded below the first chapter of a documentary by Australian journalist John Pilger, entitled Year Zero, which was released in 1979 and brought news of the atrocities in Cambodia to the world. (the guy at the beginning uploaded it to youtube – bear with it). This site is also worth a visit, as it has some amazing photographs from Tuol Sleng.